Our regular readers will remember a previous article of ours titled, “What Kinds of Entertainment Bets Can I Make“. You may remember from that article that we touch up on the topic of politics a little bit, but barely, just a mention really.

Keep in mind, we’re not political masterminds here, never claimed to be. We’re not here to tell you who you should vote for. That’s nobody’s business but your own.

We just want to point out that if you think you’re politically savvy, you can absolutely put your money where your mouth is and make some dough while doing it! 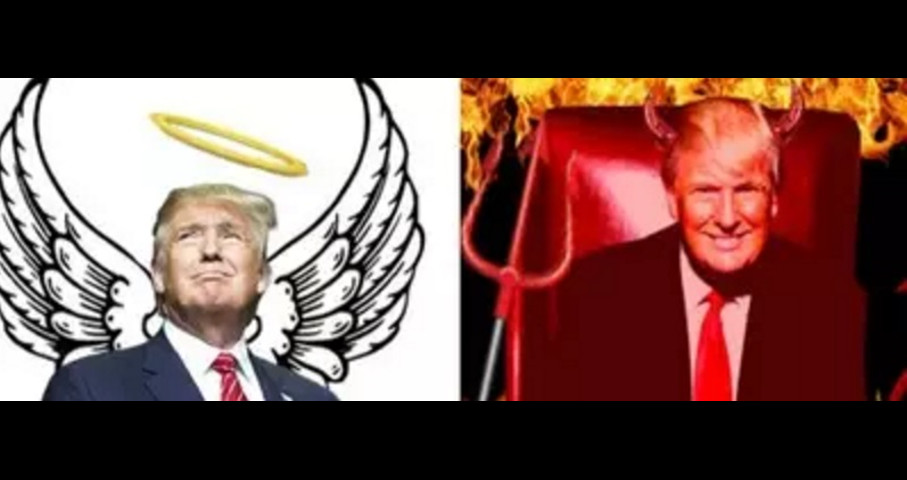 No matter if you love or hate the guy, you can make some money based on his future!

Where Can I Place Bets on Politics? A Top 3

You can make any of these your top sportsbook if you would like. There are reasons we support them and use them ourselves! We are also huge fans of joining more than one sportsbook to ensure that you are always getting the best lines and the best odds!

Just click on any of these names if you’d like to know more about each sportsbook and be taken to our honest reviews! Also, click on the big pictures to be taken directly to any of the mentioned sites!

Not only US friendly, but very US politics friendly as well. As this is being typed, (September 29th 2019) there are four categories to choose from for your wagers, surely with more to come as we get closer to our elections! Keep reading and scrolling to learn more about these categories.

Not only can you bet on politics, but you can also get in on the action on some more random, unexpected things as well, such as snooker, darts, and even table tennis (yes, ping-pong)!

Usually, the standard welcome bonus over at Bovada is a match bonus of up to $250, however, for the time being that has actually been lifted to $1000 if you use one of the following codes when making your initial deposit!

Better get in on that before it’s too late and they’re not doing it anymore!

Another very US friendly sportsbook that accepts many different types of currency for deposits. Of all the choices, you’ve got

You can also try them out without losing any money! Head on over there and check out their promotion for a Risk Free $25 Wager!

This one is perhaps the most fun, at least at the time of this writing. As of right now they have the most options as far as breaking down the wagers, as much as they can anyway and even throw in some international stuff in there for those that are interested in the things that go on over across the waters.

BookMaker also has some of the greatest promotions and rewards for those that choose to use bitcoin. If you would like to know more about some of the best bitcoin wallets to use when gambling, take a look right on over here!

And let’s move on to the stuff!

Let’s start with the most basic one, the one everyone would expect…

This may be one of the easiest ones of the past. “Is my candidate going to win”, with almost a 50/50 chance. Those days are long gone, at least for this cycle.

Depending on who you watch for the news and for the commentary, you’ll see quite the differing viewpoints going on. You’ve got those that are convinced Trump is about to be impeached and he won’t even be in the next election. You’ve got those that are convinced that he will in fact win again in one of the biggest landslides ever, paving the way for Trump Jr. in 2024.

If you’re willing to go and take a gamble on that you’re more than welcome to go to any of the three sites mentioned above and put your money where your mouth is!

If you do in fact think that Trump will win again, as of this writing, BookMaker is giving the best odds on that although that may change at any time! 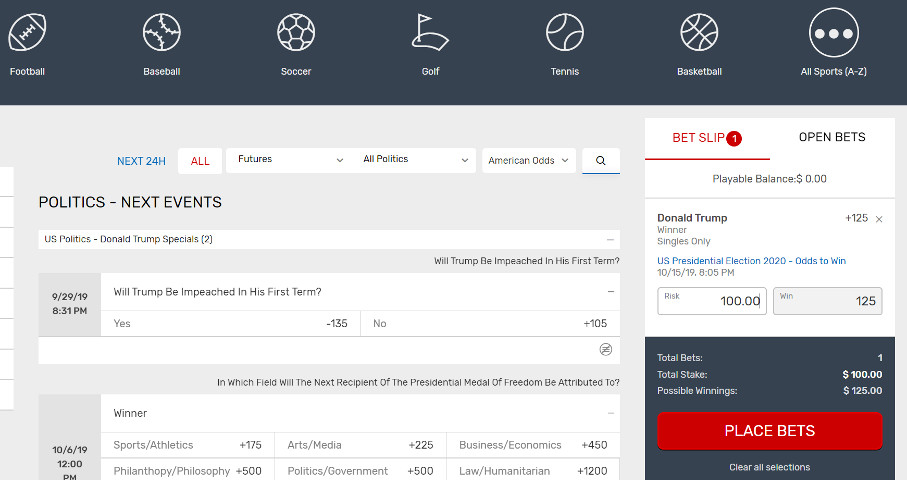 The bet slip over at Bovada.

An Example of Betting on Politics

Take a look at the image above. Let’s just say, hypothetically, that I thought Trump is going to take it again in 2020. I would simply choose which bet I wanted to place and click it. Then you see the bet slip appear on the right hand side of the screen.

I would then place the amount I would like to wager, in this example $100. After that, just click the big red, “PLACE BETS” button. You can see that with the odds of +125, I would potentially win $125.

Absolutely hate Trump and a big fan of MSNBC? That’s okay, totally your decision. If you listen to them and what they like to rant about, you can flat out go and bet on whether or not ol’ man Trump is going to be impeached during his term over at Bovada.

Impeachment aside, BetOnline will give you 5% above market price for bitcoin deposits after which time the pessimist or optimist in you can wager on just flat out whether or not he’ll finish his first term!

Now Let’s Break it Down a Little More, (the Nominees)

You can bet on Trump without even thinking he’ll win the election, or even be in it!

You may believe that Trump just will not be running due to impeachment, health, dropping out, whatever. While there are no names to replace him at this time, you can still bet on whether or not his name will be on the ballot.

Moving Over to the Left Side

This is where things start to get a little more interesting since we just don’t know at this time who is going to be the big name on the ballot, but that doesn’t have to stop you from making your prediction!

Warren, Biden, Yang, Sanders… You’ve got all of ‘em on the betting slips and ready to go!

Once again you can go with the simple, “Will they win” (Bovada), to the “Will they even be on the ticket” (BetOnline). 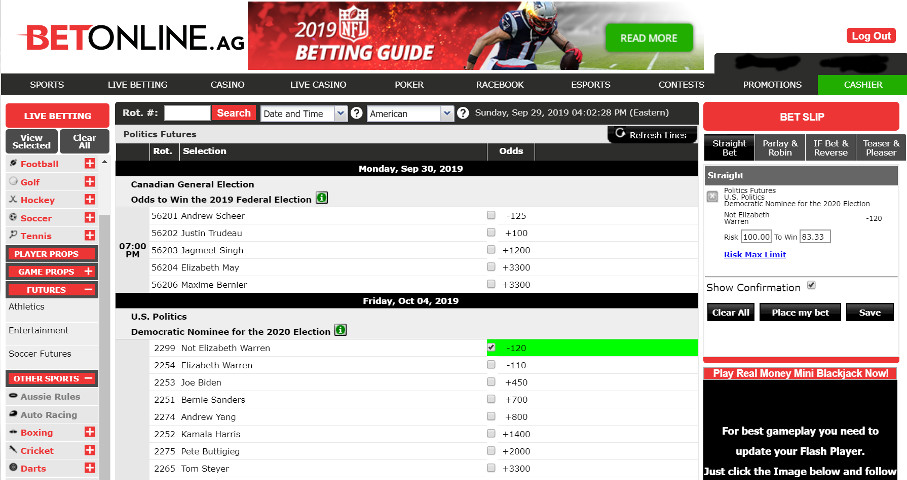 Anyone but Warren is always a possibility!

As I type this, Elizabeth Warren is looking like the democrat favorite among all three of these sites, although the odds are not as good as Trump being re-elected, just sayin’. However, if you look at the image above, you’ll see something. She’s still not the fave in the sense that you can literally bet on anyone but her, at least according to BetOnline!

Once again, after clicking on exactly which bet I would like to place, the Bet Slip appears on the right hand side where I would confirm my wager. In this case and with these odds I would have to wager $100 in order to win $83 and some change.

If you fancy yourself a political activist and you don’t like the way things are looking, now is the time to act, but that’s not why we’re here! 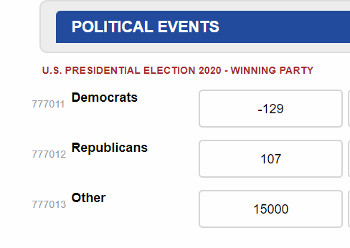 Take a look at these odds from BookMaker. This may be the year a 3rd party wins and someone’s gonna get PAID.

Let’s be honest here. Some of you have not cared enough to look at individual candidates yet. That’s okay, BookMaker still has you covered!

You can head on over there, claim their 15% cash bonus and just flat out bet on “Republican or Democrat” and leave it at that! While waiting until election time head over to their casino where you also got a 50% bonus when you made your deposit. (If you took it and accepted it, that is!)

Even if you don’t want to go with either of the two big parties, you can bet against them both. The odds are very, very heavily, stacked against you, but absolutely crazy things have happened in the world of betting before!

Think you know all there is to know about the upcoming Canadian federal elections? Prove it!

You can go to BetOnline and wager on Andrew Scheer, Justin Trudeau, Jagmeet Singh, Elizabeth May, any of those Molson swilling beaver lovers!

Right now, the best odds are on Andrew Scheer. Looks like Mr. Trudeau has really porked himself as of lately, but I could be wrong. I don’t know much at all about Canadian politics, don’t take my word for squat on any of that.

Over at Bovada with their $4500 bitcoin bonus, you can bet on “Will Jair Bolsonaro Complete His First Term”. That’s something I know even less about, however, the odds look good that he will, so good for him for keeping away from the scandals that plague those of us over in the states!

Last, but not least, BookMaker will let you place some wagers on the next Jamaiican election with the People National Party up against the Jamaica Labour Party. BookMaker even has some seat handicapping on this for those that really know their stuff when it comes to the home of spicy jerk chicken and one Mr. Bob Marley. 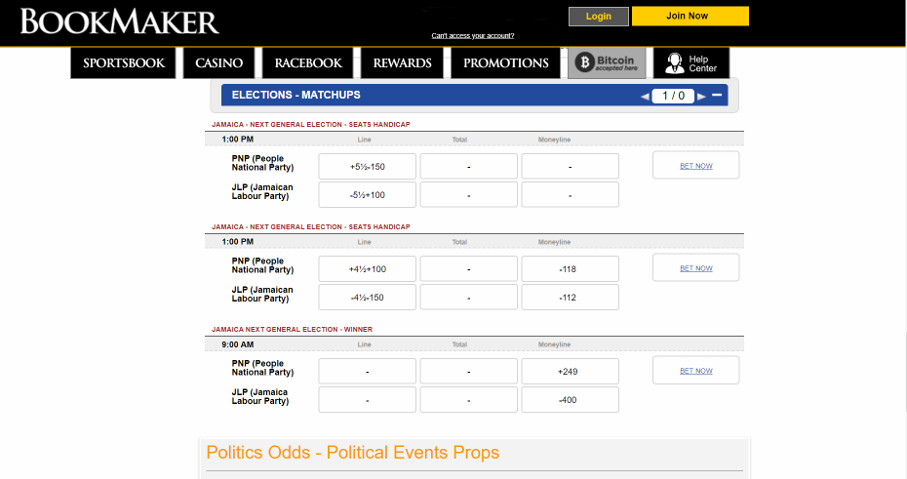 Know anything about Jamaica that you didn’t see in a movie? I don’t! But if you do, you can go place bets in their elections!

And there is that last group of people that don’t care who wins or don’t want to learn more about it. While this probably will not interest you, it’s still available.

You can head on over to Bovada and bet on which field the next recipient of the Presidential medal of freedom be attributed to, with the choices of

Is it possible for Trump to just give it to himself and then just start shoving people and saying, “O’Doyle rules”? That’s where I would put my money.

Until more information comes out, and until more decisions are made among our friends up in Washington come out, that’s pretty much what’s available in the world of betting on politics.

Those that went to school and earned themselves a degree in political sciences can go and try to make a killing.

Just kidding. The way US politics are going, hell, it’s anyone’s guess, but if you think you know how it’s all going to go, this is your chance!

Just make sure that when you do go, you go to one of our true, legit, safe sportsbooks to do so! Unlike many sites that will just send you off to wherever, we actually use these sportsbook ourselves to do our own personal wagering. Click on this link right here to check out more reviews from the places we visit!

Want to See Some More of Our Articles? Here’s a Few!